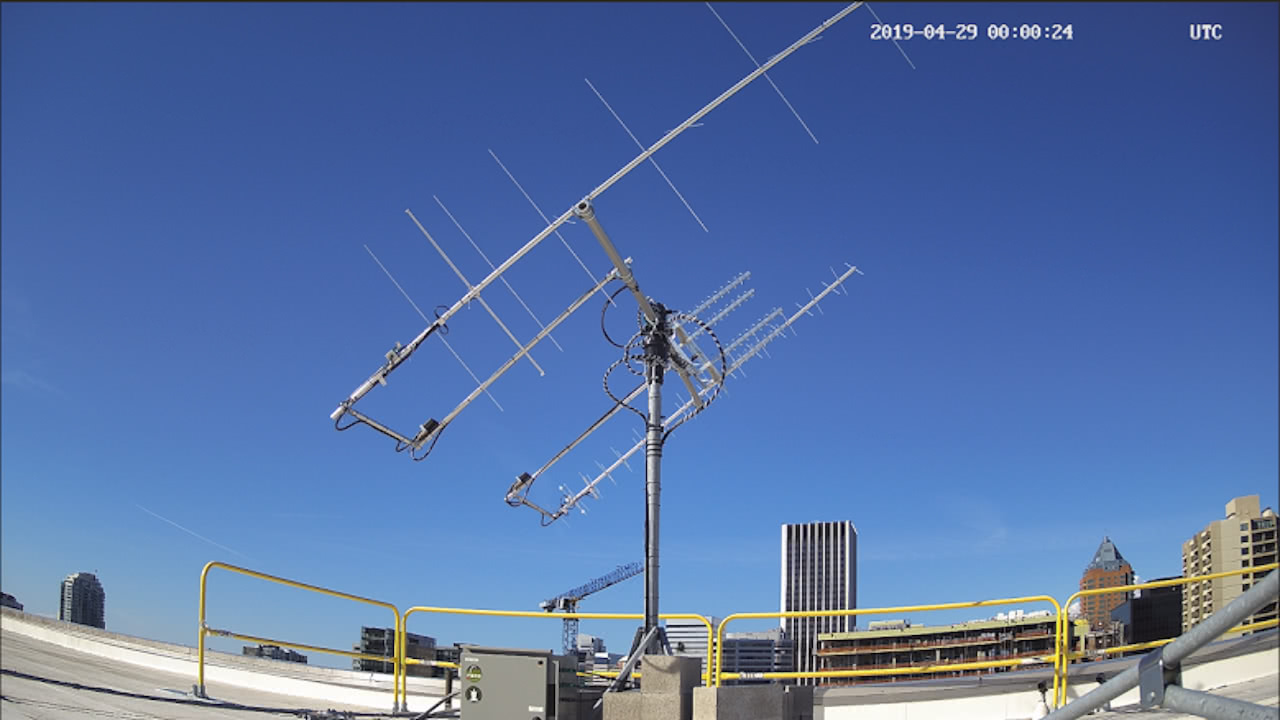 MyriadRF has stretched to the stars this week with the official launch of the SDR Satcom initiative, a collaboration between Lime Microsystems and the European Space Agency (ESA)

Launched yesterday, the SDR Satcom App Store already includes one-click installation of a range of useful utilities: SDRangel, a front-end for software defined radio and signal analysing; Gpredict, a real-time satellite tracking and orbit prediction application; SatHelperApp, a tool for demodulating and decoding LRIT and HRIT signals; and WeatherDump, a cross-platform tool to record, demodulate, decode, and process data from a number of weather satellites. Developers of suitable applications are also invited to submit their own snap packages.

Additionally, ESA and Lime Micro are making 50 LimeSDR Mini units available to developers free of charge, to help encourage growth in the ecosystem. More information is available on the official website.

Designed to offer low-noise amplification, power amplification, and filtering under software control from the LimeSDR and LimeNET families of software defined radios, the LimeRFE board is heading into production as a slightly modified design. Compared to the prototype, the LimeRFE v1.0 includes additional amateur radio band support: 50/70 MHz, 220 MHz, and 920 MHz, plus an enhanced 1280 MHz band.

Projected performance in these, and other, bands can be found on the Crowd Supply campaign page. Real-world demonstrations of the LimeRFE v0.3 prototype design, meanwhile, are available for WSPR and DVB workloads, while community member Marty Wittrock has shared his own experiments over on the forum.

The latest published entry in the LimeSDR Field Report Challenge covers the OreSat CubeSat, designed by the Porland State Aerospace Society, and the UniClOGS LimeSDR-based duplex ground station which will support it.

“We also expect that dozens of amateur radio operators all around the world will receive our digital transmissions using the Satellite Open Network Ground Station project, or SatNOGS. The SatNOGS network has one major drawback: due to cost and global regulatory concerns, SatNOGS is receive-only. UniClOGS is meant to extend the SatNOGS project by adding transmission capabilities. Because each CubeSat and CubeSat program is different, UniClOGS is also built to be extremely flexible by using the high end Myriad RF LimeSDR software defined radio (SDR).”

The full field report is available now on the LimeSDR Crowd Supply page.

Christian Furst, meanwhile, has been experimenting with transmission to the amateur transponder on the QO100 satellite – and has written up a how-to guide for others to follow along.

“The objective is to describe a station that operates, as for reception, the SDR Console software,” Christian explains, referring to an earlier article detailing reception of signals from QO100’s amateur radio transponders. “Far from conventional frequency converter solutions, SDR transmission has the advantage from its ‘small size.’ However, we will look in detail at the possibilities of amplifying signals useful for upwards 2400 MHz.”

As well as writing his more general guide, Christian has been working on building a portable full-duplex ground station for QO100. “12V battery SDR Console + Lime SDR + CN0417 + Wifi-AB007 + DC5GY patch + Camping dish 30 cm,” Christian writes of his creation, which is designed to be self contained and suitable for field use, on Twitter “Receiving with WebSDR for moment. The advantage with small dishes is that you can be depotted by 30 degrees, it always works nominally!”

Christian’s QO100 transmission guide is available on his website.

Community member Marty Wittrock has launched a challenge for the development of a Hermes protocol to LimeSDR application programming interface (API) translation utility.

“I’m putting the challenge out here this Sunday morning (in Iowa) to all the software developers out there,” Marty writes on the MyriadRF forum. “There needs to be a Hermes Protocol I or Protocol II translator created for the LimeSDR such that PowerSDR can function with the LimeSDR.

“There… I’ve put it out there. The challenge (to a developer) would seem pretty straightforward because its taking open source software from TAPR and applying LimeSDR API calls instead of what’s required for TAPR or Hermes architecture SDRs. If you want to be paid for that effort, there are Hams lined up to make that happen.”

More information is available on the MyriadRF forum.

The GNU Radio project has released version 3.8.0.0 of its popular software defined radio development kit – the first minor-version release in over six years.

“It’s the first minor release version since more than six years, not without pride this community stands to face the brightest future SDR on general purpose hardware ever had,” writes Marcus Mueller of the release. “Since we’ve not been documenting changes in the shape of a Changelog for the whole of the development that happened since GNU Radio 3.7.0, I’m afraid that these release notes will be more of a GLTL;DR (git log too long; didn’t read)
than a detailed account of what has changed.

“What has not changed is the fact that GNU Radio is centred around a very simple truth: let the developers hack on DSP. Software interfaces are for humans, not the other way around.

“And so, compared to the later 3.7 releases, nothing has fundamentally modified the way one develops signal processing systems with GNU Radio: You write blocks, and you combine blocks to be part of a larger signal processing flow graph. With that as a success story, we of course have faced quite a bit of change in the systems we use to develop and in the people that develop GNU Radio. This has lead to several changes that weren’t compatible with 3.7.”

More information is available in the release notes.

Adam’s short video, less than three minutes long, details the creation and testing of a helical feed antenna designed for reception of the 2.4 GHz transponder on the QO100 satellite. What’s interesting about Adam’s build, though, is that it’s all salvaged parts: the body is a cut-down tin can, the helix a length of copper wire, and the reflector an old satellite dish.

The video is available now on Adam’s YouTube channel.

Hackaday’s Dan Maloney is written up his observations of the slow demise of the NOAA-15 weather satellite, launched in 1998 with an expected two-year lifespan yet only now beginning to fail.

“NOAA-15, a satellite launched in 1998 to monitor surface temperatures and other meteorologic and climatologic parameters, has recently started showing its age,” Dan writes. “This is the way of things, and generally the decommissioning of a satellite is of little note to the general public, except possibly when it de-orbits in a spectacular but brief display across the sky.

“But NOAA-15 and her sister satellites have a keen following among a community of enthusiasts who spend their time teasing signals from them as they whiz overhead, using homemade antennas and cheap SDR receivers. It was these hobbyists who were among the first to notice NOAA-15’s woes, and over the past weeks they’ve been busy alternately lamenting and celebrating as the satellite’s signals come and go. Their on-again, off-again romance with the satellite is worth a look, as is the what exactly is going wrong with this bird in the first place.”

The full piece is available now over on Hackaday.

RTL-SDR has gathered together the talks from the GNU Radio Days 2019 event, timestamping recordings to make it easier to find particular topics.

“GNU Radio Days 2019 was a workshop held back in June. Within the last week recordings of the talks have been uploaded to YouTube by the Software Defined Radio Academy channel,” write RTL-SDR. “The talks cover a wide range of cutting edge SDR research topics and projects. Below we list the talks with timestamps for the YouTube video.”

The full timestamp list – which includes topics on array signal processing optimisation in GNU Radio, the SatNOGS ground station project, signal analysis, VLBI, signal acquisition analysis, nano-satellite reception, and more – is available on the RTL-SDR blog, along with links to the YouTube videos themselves.

Finally, product engineering specialist Baseapp has published a piece on antenna tuning, with a particular focus on the antenna types commonly used by Internet of Things (IoT) devices.

“[The] antenna is probably the most important part of a wireless system, as it is responsible for sending and receiving the data on the physical layer,” Baseapp explains in the beginner-oriented piece. “A properly tuned antenna can help in many ways. It can increase the working range and can also help in reducing the power consumption of wireless device.

“VSWR, S11, Return Loss: these are the most commonly used and heard terms when doing antenna tuning. VSWR stands for Voltage Standing Wave Ratio. It is a function of the reflection coefficient, which describes the power reflected back from the antenna. The reflection coefficient is known as s11 or return loss. The VSWR is always a real and positive number for antennas. The smaller the VSWR is, the better the antenna is matched to the transmission line and the more power is delivered to the antenna. The minimum VSWR is 1.0. In this case, no power is reflected from the antenna, which is ideal. In general, if the VSWR is under 2 the antenna match is considered very good and little would be gained by impedance matching.”

The full article is available over on Baseapp.