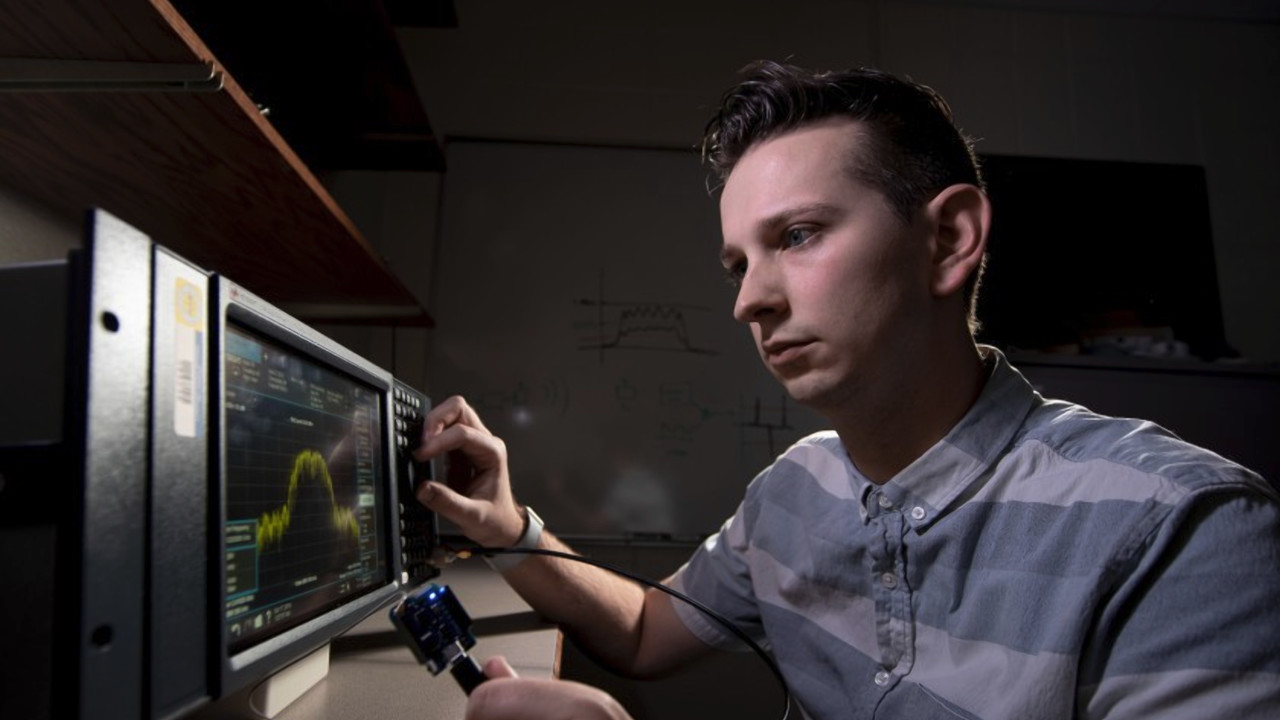 Salil Tembe has published a guide on using GNU Radio and a LimeSDR Mini to transmit a comma-separated value (CSV) text file over the airwaves.

“We have seen the LimeSDR Mini several times on this blog,” Salil writes in the introduction to the piece. “So far, we have only seen how it can generate analogue modulation to transmit voice and what not. Being an SDR capable to transmit practically anything, we can even transmit binary data.”

The project – which comes with downloadable GNU Radio flow graphs along with a write-up that dives into some of the mathematics behind the concept – sees a CSV file transmitted over the air using binary phase shift keying (BPSK) – with impressive success, bar some issues with a lack of preamble. “While transmitting the file, the receiver often drops the initial few bytes of data,” Salil explains. “This happens because the receiver algorithms, especially the clock sync and the Costas loop require time to converge. For testing the setup, I chose a small CSV file and transmitted it. Except for losing the initial couple of bytes, the transmission was flawless.”

Development of the QRadioLink application continues with the release of 0.8.2, which Adrian Musceac says is likely to be the last stable build of the year.

Built with education in mind, QRadioLink is a popular SDR package for amateur radio use. Back in September the software was updated to 0.8.0, bringing with it an overhaul to the user interface and a range of under-the-hood improvements – and now version 0.8.2 has been released, with developer Adrian Musceac pinning it as the last stable release of the year.

According to a changelog posted to the MyriadRF Discourse, 0.8.2 includes fixes for several bugs, performance improvements for the memory scan, a night mode theme for the user interface, and audio mixing capabilities. A bigger change is the ability to run entirely headless, with no user interface, and to accept remote control via network or via Mumble private text messaging.

Hackaday has highlighted a project from Debraj Deb: the creation of a Bode analyser from a low-cost microcontroller development board.

“Frequency domain analysis is very important to know more about any system/circuit or transfer function that we deal with,” Debraj explains. “And the first thought comes to our mind about frequency domain analysis is ‘Bode plot.’ Bode plot is a combination plot of magnitude and phase difference of output vs. input of a cosine wave of single frequency, when it is applied to a circuit.”

Debraj decided to build his own Bode analyser, complete with PC-based graphing, on an STMicro STM32F407 Discovery Board. The project write-up goes into considerable detail about its capabilities, though there are some restrictions – including a limited maximum frequency – inherent in his approach.

Nvidia has announced it is throwing its hat into the 5G ring, launching a software development kit and edge-computing platform to accelerate 5G base stations via general-purpose graphics processing units (GPGPUs).

Unveiled at the Mobile World Congress event by founder and chief executive Jensen Huang, Nvidia’s Aerial takes two approaches to tying the company’s GPU products to the future of telecommunication: CUDA Virtual Network Function (cuVNF) and CUDA Baseband (cuBB), both of which use the company’s CUDA language to perform high-speed heavily-parallel calculations on graphics processor.

The launch came as Jensen told attendees at the conference that the future of networking would rely on a new architecture which is “reconfigurable by the second,” using software-defined capabilities – including software-defined radio – in place of last -generation fixed-function hardware. To support that, Nvidia also announced the EGX edge computing platform – which includes, naturally, a number of GPUs.

More information is available on the Nvidia blog.

The UK, meanwhile, is a little more concerned about its 2G network – which, a report commissioned by the UK Spectrum Policy Forum suggests, may remain available until at least 2039 thanks to its use in smart metering and emergency call systems.

As wireless services increase in number, spectrum grows scarce. The launch of a new service often requires the retirement of an older one – as with the launch of digital television, which in most countries saw the older analogue broadcasts ceased. For many nations, preparing for 5G and its successors means saying goodbye to 2G – but the UK, a report from the Spectrum Policy Forum says, is unlikely to see 2G retired until at least 2039.

“We sometimes focus on technology without fully understanding the impact on services people rely on. Among other things, 2G enables smart metering and the mobile phones used by many vulnerable people in society,” explains Spectrum Policy Forum Steering Board chair Tony Lavender of the report. “We need to think through the alternatives for these services before switching them off. This report was commissioned by the SPF to highlight to Government, Ofcom and operators just what services will be affected, and the potential implications of a premature switch-off.”

The full report is available on TechUK.

Researchers at Brigham Young University (BYU), Washington University, and the University of Utah have discovered a way to boost the range of Wi-Fi networks by over 60 metres – with the proviso that the trick only really works for devices which can communicate in a bit per second (1b/s).

Designed for Internet of Things (IoT) devices, the On-Off Noise Power Communication (ONPC) protocol requires no changes in hardware. “That’s the really cool thing about this technology: it’s all done in software,” says Phil Lundrigan, assistant professor of computer engineering at BYU. “In theory, we could install this on almost any Wi-Fi-enabled device with a simple software update.”

The protocol works by physically switching a radio on and off in a pattern the receiver can distinguish from background noise. While the throughput is slow, at around one bit per second, it’s enough for a range of use-cases – including, the researchers point out, IoT devices including garage door sensors, air quality monitors, and sprinkler systems.

The team’s work has been published in the Proceedings of the 25th Annual International Conference on Mobile Computing and Networking (MobiCom ’19).

Hobbyist electronics specialist Adafruit has announced it is turning its attention to the stars, launching a Discord channel where people can discuss SmallSats and CubeSats.

“You’ve probably seen all the recent Python in Space, and CircuitPython in space posts and projects, so we’ve made a Discord channel for the community to hang out and discuss/share all things SmallSats,” the company announced this week. “With over 14,000+ community members on the Adafruit Discord server, we’re thrilled to add a SmallSats channel for the community, see you there!”

The channel, which launches as the latest example of how satellite technology is entering the reach of the casual hobbyist, is available now on the Adafruit Discord.

A team of researchers at the Massachusetts Institute of Technology (MIT) claim to have made a breakthrough in in-band full-duplex (IBFD) technology, allowing it to be used on high-power and long-range networks for the first time.

In-band full-duplex systems allow a device to send and receive on a single frequency simultaneously, but come with a major problem: self-interference. Existing IBFD systems have typically been limited to short-range low-power setups, but Kenneth Kolodziej, Bradley Perry, and Jeffrey Herd say they’ve worked out a means to get around the problem and allow IBFD to work on high-power networks – boosting a base station’s client count a hundredfold and data rates tenfold compared to 4G LTE, they claim, using a beamforming phased-array antenna.

“We envision this IBFD operation within a phased-array system as a novel paradigm that may lead to significant performance improvements for next-generation wireless systems,” MIT’s Jonathan Doane. “Overall, the significant improvements offered by Lincoln Laboratory’s system could provide future wireless users with cutting-edge experiences that include connecting more devices inside their smart homes as well as maintaining high data rates in large crowds, both of which are impossible with current technology.”

The team’s work has been written up on MIT News, and has been published in the journal IEEE Transactions on Microwave Theory and Techniques.

IEEE Spectrum has published an article on the difficulties involved in transporting DARPA’s Colosseum, a massive radio test-bed used for the organisation’s Spectrum Collaboration Challenge, to Mobile World Congress for the finale of the competition.

DARPA’s Colosseum was built to simulate a range of radio frequency environments, as part of the Spectrum Collaboration Challenge. Taking place over the last three years, the Challenge sought to find technologies which could make the most of limited spectrum allocations by reducing congestion.

For the finale, the entire Colosseum was moved from its home at Johns Hopkins University to the Mobile World Congress in Los Angeles – a process which took dismantling the system, loading the two converted cargo containers onto articulated lorries, driving said lorries inside the Los Angeles Convention Centre, then carrying out what its organisers call a “forklift ballet” after discovering the Centre lacked forklifts strong enough to lift the containers alone.

The full article is available on IEEE Spectrum.

First publicly floated last year, Starlink is an effort to launch a globe-spanning constellation of satellites as a means of providing low-cost low-latency internet connectivity worldwide. Its first test, though, was in providing SpaceX founder Elon Musk with a link to his favourite social networking site, Twitter – and it passed with flying colours.

“Sending this tweet through space via Starlink satellite,” Musk posted to Twitter – shortly after confirming “whoa, it worked!”

Starlink is due to open to the public some time in 2020, while SpaceX has applied to increase the number of satellites in the constellation despite concerns that such a dense constellation may pose a hazard to other space traffic – as demonstrated when a Starlink satellite nearly collided with a European Space Agency satellite.

Finally, Via Satellite has made a proclamation: the future of satellites will be software defined.

“Flexibility and the ability to reconfigure a satellite which is already in orbit, is something operators have been asking for years,” writes Via Satellite’s Tereza Pultarova. “Especially for operators of Geostationary Orbit (GEO) satellites, which usually have lifespans of 15 years or more, the ability to adjust the spacecraft to the changing needs of the market is essential.

“That might include moving a satellite into a different position or even switching its functionality from TV broadcasting to internet connectivity — something that would be impossible with traditional hardware-defined satellites.”

The full article can be viewed on Via Satellite now.