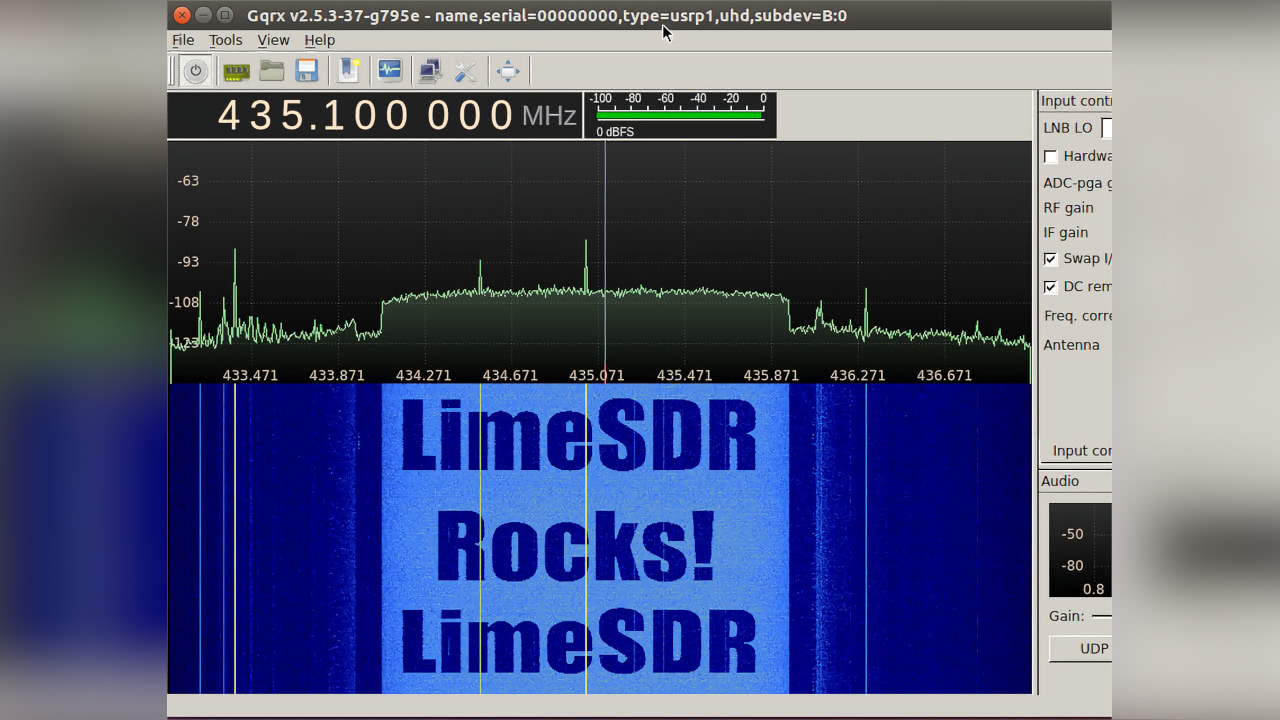 Fulfilment of the LimeSDR Mini, GPIO Board, Companion Board, Grove Starter Kit, and Hacker Case continue to progress, with Crowd Supply estimating that the final items will have been sent out by the end of May.

Backers waiting for a LimeSDR Mini will be pleased to hear shipment continues in weekly batches, with all pre-orders expected to have been shipped by mid-May. Those who have ordered the LMS8001 Companion Board to boost their SDR’s frequency range, meanwhile, can expect to receive theirs following initial shipment on the 27th of April. Anyone who had ordered their LimeSDR Mini with an aluminium case, meanwhile, will be waiting for shipments to begin on or around the 25th of April, while backers of the Grove Starter Kit for LimeSDR Mini will begin receiving their goods when shipping starts on the 26th of May.

For owners of the original LimeSDR who have ordered add-ons, both the input-output focused GPIO Board and the compatible Hacker Case are due to begin shipping from the 5th of May. For all backers and pre-order customers awaiting items, now is the time to log into your Crowd Supply account and double-check that your address details are correct in order to receive your goods as quickly as possible.

The pyLMS7002M-based vector network analyser (VNA) example code has been updated with a new measurement script allowing for use in the 800MHz-1GHz range.

Sitting alongside the existing measurement and calculation Python scripts, the new variants can be identified by the “900M” suffix indicating the centre point of their frequency range. Written by D. Grujic and announced on the forum this week, the new example uses the LimeSDR’s low-frequency T1_1 and RX1_L ports to achieve accurate results.

The new scripts are available now in the pyLMS7002M GitHub repository, along with updated documentation describing their use.

Durand JeanYves has published images of a long-range drone equipped with a Raspberry Pi and LimeSDR Mini, which act as a DVB-S digital video broadcaster on the 437MHz spectrum.

Posted to micro-blogging site Twitter, Durand’s pictures show the LimeSDR Mini connected directly to one of the USB 2.0 ports on a Raspberry Pi 3 Model B, then attached to a frame slung underneath a quadcopter drone optimised for long-range use.

OsmoCon2018, the official technical conference for Osmocom users, operators, and developers, is scheduled to take place in Berlin on the 18th and 19th of October, and the official call for participation has gone out.

“We call on everyone with experiences to share around the Osmocom member projects to submit talks, workshops, discussions or other proposals,” the event organisers explain. “We are particularly looking for contributions about: Updates on features/functionality/status of individual Osmocom projects; success stories on how Osmocom projects are deployed in practice; migration from OsmoNITB to the post-NITB architecture; tutorials / workshops on how to setup / analyze Osmocom projects; statistics, reporting, operations aspects of Osmocom projects; third-party open source utilities to be used with Osmocom projects.”

Now in its second year, OsmoCon2018 will be held at the Hotel Albrechtshof in Berlin on the 18th and 19th of October 2018, and is open to anyone involved in the Osmocom open-source cellular infrastructure project or any of its individual component parts including, but not limited to, OsmoBTS, OsmoBSC, OsmoSGSN, and OpenGGSN. More details on the event are available at the official website, while those interested in participating have until the 16th of May to submit their proposal.

LimeSDR user Chuck Swiger, interviewed in last fortnight’s OTA, has been playing with using Gqrx’s waterfall spectrogram display in an unusual way: as an output for images and text.

“Studying the pyLMS7002M code and playing with the examples,” Chuck writes of his experimentation. “Got into the basic/TxNCO_Hopping and started drawing patterns in a receiver waterfall display, then remembered a project called gr-paint. Build it, start up gnuradio-companion and finally got an osmocom sink to transmit across the room.”

The result: a transmission which is easier on the eyes than on the ears, displaying a repeating text message on the waterfall spectrogram with surprising clarity. Chuck has also provided sample Python code for automatically converting plain-text messages into Morse code and transmitting it via the LimeSDR, using his callsign to automate CW ID transmission for ham band use.

Chuck’s posts can be found over on the Myriad-RF forum.

Reddit user Kevin Dee has posted a project using a low-cost SDR module and a Raspberry Pi single-board computer, plus a home-made QFH antenna, to receive and decode images from NOAA weather satellites before automatically posting them to micro-blogging service Twitter.

“Its sometimes hard to find good documentation for projects like this, but I found an Instructables page that did a really thorough explanation of setting up SDR with the Raspberry Pi and scripting to automatically record NOAA passes,” Kevin writes. “I had to fill in the gaps myself with Twython to make the scripts post the images to twitter. I also laser cut the parts for my QFH antenna.”

Kevin’s next step for the project is to add support for the Meteor satellite, which he has seemingly successfully recorded but never successfully decoded into an image.

More details are available on Kevin’s Reddit post, while his source code can be found on Google Drive along with CAD files for the antenna. The project can be seen in action on the @BarronWeather Twitter account.

Pop technology publication Wired has published a piece on Balint Seeber’s research into triggering emergency broadcast systems in the US, claiming to have reverse-engineered the protocol to the point of being able to broadcast any audio on-demand.

Inspired by the persons unknown who succeeded in activating emergency sirens around Dallas last year, as detailed in an earlier OTA, Balint’s research focused on capturing the radio traffic for regularly-scheduled test messages.

“Now, after two-and-a-half years of patiently recording and reverse-engineering those weekly radio communications, Seeber has indeed found that he or anyone with a laptop and a $35 radio could not only trigger those sirens, as unknown hackers did in Dallas last year. They could also make them play any audio they choose,” writes Wired’s Andy Greenberg. “False warnings of incoming tsunamis or missile strikes, dangerous or mass-panic-inducing instructions, 3 am serenades of death metal or Tony Bennett. And he has found the same hackable siren systems not only in San Francisco but in two other cities, as well as hints they may be installed in many more.”

The full piece can be read over on Wired’s website.

“There are different types of access and connectivity coming into the picture, all of them connecting to the same packet core using similar types of infrastructure and similar standards,” Raghu Rao, principal system architect for wireless communications at FPGA specialist Xilinx, tells Brandon. “What we see people looking for is a very, very flexible modem.

“There are aspects of a modem that cannot entirely be software on a server or software running on a x86 processor, such as extremely compute-intensive tasks,” Rao continues. “The approach that we see people taking is the software-plus-acceleration approach, especially at what we call layer one, or the physical layer. Those workloads are accelerated, and a great choice for acceleration is FPGAs.”

Hackaday has brought to our attention a project by Paul Lutus to improve the accuracy of an affordable arbitrary function generator by creating a low-cost high-accuracy external clock.

“I have a Siglent SDG 1025, an inexpensive signal generator that’s satisfactory in every way except one — its frequency accuracy isn’t very good and there’s no way to adjust it,” Paul explains. “I required this signal generator to provide accurate test signals as part of my recent PLSDR software-defined radio project. The Siglent provided many kinds of signals I used to validate and improve PLSDR.

“I ended up using mostly junk-box parts to build a cheap and dirty frequency standard that reduces the generator’s clock error to less than .1 PPM (i.e. 1 Hz at 10 MHz) and that’s likely to stay on frequency over months or years. This sort of project is much easier and less expensive than it would have been during my prime years in electrical engineering (decades ago, before I got into computer science). Because I wanted the outcome, not the experience, the end result is a bit of an ugly ducking and I’m glad it spends most of its time sealed up in its little metal box. After about five minutes of warmup time it’s very stable, reliable and cost under US$40.00 (not counting the junk-box parts that tie it all together).”

Paul’s project is written up in full on his website.

Electronics engineers Mare & Gal, who created a 6×1 antenna switch detailed in an earlier OTA, have written up the build process of an 868MHz-tuned co-linear antenna for LoRaWAN use.

“The tools needed for making this antenna are nothing special. The calliper or some precise measuring tape is a must-have. Antenna construction requires some soldering and cable cutting. Good-to-have is cable-peeling tool, but it can be done with a sharp knife, too. The hot glue gun is useful for sealing this antenna and finally, if chosen connector requires crimping, some tool for connector assembly is required. The ohm-meter would be also helpful to check the shorts.”

The full project can be viewed on the Mare & Gal Electronics blog.

Anyone looking for an introduction to RF filtering could do worse than Naich’s instructions on taming the output of the noisy FM transmitter created by attaching a 700mm wire to a GPIO pin on a Raspberry Pi.

“A Raspberry Pi with a 700mm long wire on pin 7 running a variant of the PiFM software is an easy way to make a nuisance of yourself,” Naich writes. “We might not be broadcasting kilowatts of power and realistically, you are not going to be knocking planes out of the sky, but the Pi is a dirty old man when it comes to broadcasting and we need to clean up its act. The obvious way to do that is to put a filter between the Pi’s output and the aerial.”

Naich’s finished design, which sits as a daughterboard on the Pi’s GPIO port, is certainly functional. “Out of band signals are attenuated by at least 20 dB,” he writes, “which means they are 1/100th the power of when it was hatless. There is even a little bit of gain at our broadcast frequency, which also amplifies the in-band harmonics, unfortunately. It’s not exactly BBC quality but it should stop you annoying the neighbours.”

Naich warns that users should be sure that they are licensed for transmission on the FM band, “which is highly unlikely,” and otherwise presents the information for educational purposes only. The writeup is available on Naich’s blog, along with circuit design files for the filter.

Based on out-of-print or otherwise hard-to-find material scanned by numerous contributors, the Folkscanomy Ham and Amateur Radio section of the Internet Archive is a treasure-trove of documentation from G. R Jessop’s VHF-UHF Manual to the Radio Amateur’s Handbook 1976. In total, the archive includes 395 individual files available to view in-browser or to download in a variety of formats.

The Folkscanomy Ham and Amateur Radio archive is available now on The Internet Archive.