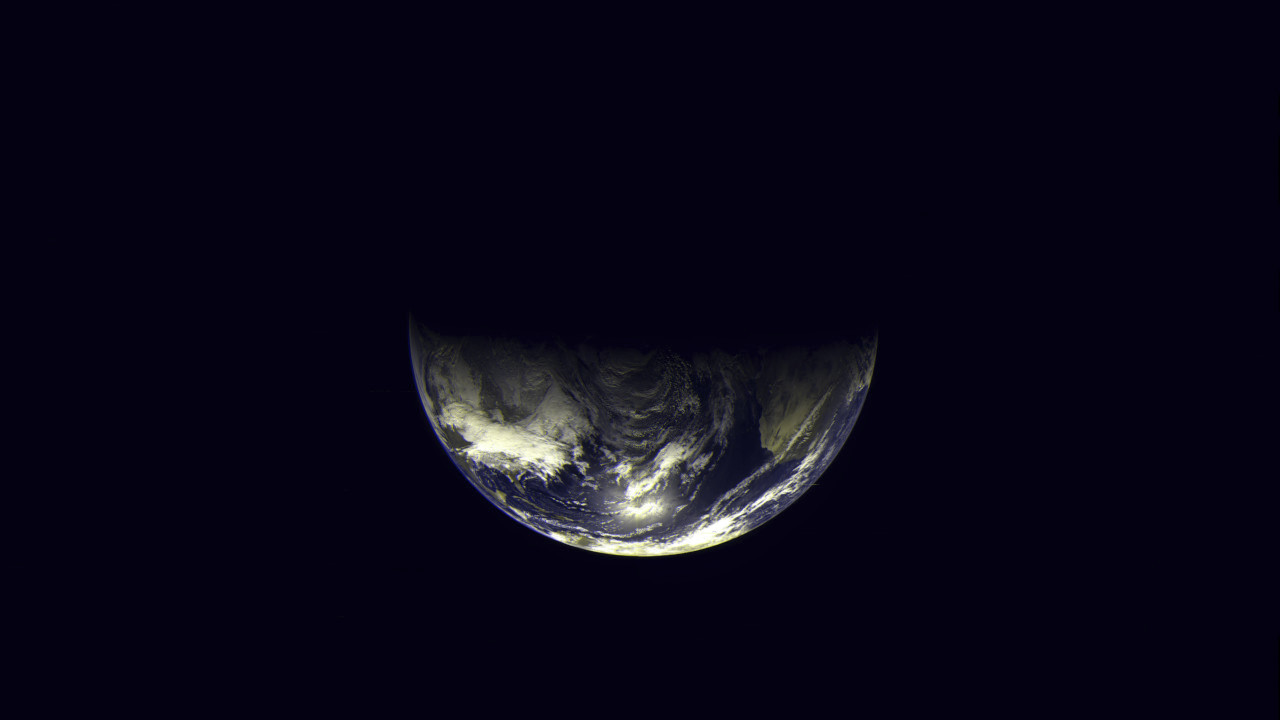 Launched in February 2021 as the first in the ARKTIKA constellation and serving as an Arctic monitoring system, ARKTIKA-M1 transmits at the lower end of the X-Band – out of range of most affordable software-defined radio systems, but receivable with a suitable downconverter capable of shifting the transmission down from its native 7865 MHz.

Speaking to RTL-SDR.com, Arved detailed a rig which includes a LimeSDR USB running at 50 MSPS connected to a low-noise pre-amplifier and a home-made downconverter. Recordings of the satellite’s transmissions, made every 15 minutes at its apogee, are captured then decoded to reveal the imagery.

Arved is the latest in a growing number of LimeSDR users picking up on X-Band transmissions. More details on his work are available on the Lime Micro website, while Jean-Luc Milette, a pioneer of the approach, wrote a detailed article on the topic for the GEO Newsletter back in 2019.

Lime Micro chief executive Dr. Ebrahim Bushehri is to participate in a panel at the EU Open Source Policy Summit 2022, discussing how open hardware – like the LimeSDR – can help prevent issues like the ongoing industry-wide component shortages.

“Open Technologies and Open Source are at the heart of [our] new reality and are a source for optimism. ‘Open’ lowers the barriers to competition, delivers collaborative innovation, increases welfare, while letting end-users maintain control and autonomy,” OpenForum Europe, the organiser of the eighth EU Open Source Policy Summit, explains.

“Open and collaborative digital innovation is no longer a theoretical concept. It is the modus operandi of companies and countries that engage at the cutting edge of the technological and societal innovation needed to tackle the grand challenges.”

To prove this, the Summit – held entirely online – is to host a series of talks and panels on topics ranging from using open source to build public sector capacity and digital sovereignty to the way it has impacted and could help prevent component shortages and other supply chain problems – the latter being the expert panel in which Ebrahim will be participating.

The event is scheduled for the 4th of February starting at 0900 Central European Time (CET), with registration open now on the OpenForum Europe website.

A pair of researchers from Antalya Bilim University have published a paper offering a guided tutorial for building and deploying 5G cellular networks using open-source software and off-the-shelf hardware – including the LimeSDR.

“Motivated by the many features and benefits enabled by Open RAN, there is a huge need for an educational comprehensive step-by-step tutorial on how an individual or company can practically build and deploy a 5G network using open-source software and commercial off-the-shelf, general-purpose hardware,” researchers Sadiq Iqbal and Jehad Hamamreh explain.

“In this tutorial, we discuss almost everything related to the history and background of 5G companies and manufacturers, legacy RAN solutions and equipment, different ways and approaches to build a 5G network including RAN, CORE, and EDGE frameworks, open-source software, and generic hardware. After this, we illustrate in detail the steps of how to build and set up a 5G network using srsRAN with LimeSDR, and Raspberry Pi 4. In the end, we list the best possible PCs and software-defined radio (SDR) combinations that can be extremely helpful in building 5G networks.”

Luigi Cruz has released another update to his popular PiSDR operating system image, designed for plug-and-play functionality with software-defined radios on the Raspberry Pi family of single-board computers – but in doing so has retired support for older models.

“[PiSDR v6.1] drop[s] support for ARMv6 and ARMv7 boards (Raspberry Pi 1 and old Zero),” Luigi explains of his latest release. “The target is to support every Pi with VFPv4 + NEON. In other words, everything released in the last 5 years.”

The move to a 64-bit operating system image with use of the NEON extensions brings with it the promise of boosted performance and better use of Raspberry Pi models with more than 4GB of RAM – but shuts out the oldest of devices. Even models with a 64-bit processor may find the new version rather more memory-hungry than its 32-bit predecessor – a particular problem for the Raspberry Pi Zero 2 W, which has a mere 512MB of RAM.

Aside from the shift to 64-bit, the new release adds the QtDAB, IIO Oscilloscope, WSJT-X, Inspectrum, GLRPT, and SDR++ packages, as well as upgrading GNU Radio to version 3.9. As always the latest release can be found for free download on the project’s GitHub repository.

SDR++ author Alexandre Rouma has published a beta release of SDR++ Server, which makes it possible to stream data from a connect SDR – including the LimeSDR family – over Wi-Fi or Ethernet.

“It works with all devices SDR++ supports,” Alexandre writes of the new server functionality, which is designed to allow the separation of receiving hardware and the device used for user interaction. “Since it’s beta it’s still missing compression and VFO+FFT mode.

“To run SDR++ server, simply run sdrpp with the `–server` argument. You can also use the `-p` or `–port` argument to set the port it’s listening on and `-a` or `–addr` to set the IP. I’ll soon add a whitelist/blacklist setting to only allow certain devices to be used by clients.”

The server functionality, which uses a custom protocol tailored to SDR++ “to avoid basically writing SoapySDR 2.0,” is available in the nightly builds from the project’s GitHub repository.

Pseudonymous security researcher Aaron “Cemaxecuter” has published a video showing how the custom DragonOS Linux operating system can be used to set up a private GSM cellular network in under ten minutes using a LimeSDR Mini.

“This never gets old,” Aaron writes. “DragonOS Focal GSM BTS Setup in 10 minutes or less w/ Auto SMS, USSD, and Calling. Everything you see in this video is included and working in DragonOS Focal right out of the box, even if you run the distro live from a USB stick.”

Set up using a LimeSDR Mini, the ten-minute private network has all the expected functionality of GSM – but comes with a clear warning: “Transmitting on active GSM freqs is likely a huge legal issue no matter where you are located,” Aaron notes. “Take all precautions necessary to avoid doing anything that could interfere with active towers, ensure you use some sort of shielding to prevent RF leakage outside of your own workspace, and only use this with your own personal equipment as I mention in the video.”

Those who have familiarised themselves with local radio regulations and have all necessary licences and permits to proceed can watch the demo now on YouTube.

A team of researchers from the Université de Rennes have published a paper detailing how radio signals can be used to detect and classify malware running on a target device – and have released the resulting source code.

“We […] present a novel approach of using side channel information to identify the kinds of threats that are targeting the device,” the researchers explain in the paper’s abstract. “Using our approach, a malware analyst is able to obtain precise knowledge about malware type and identity, even in the presence of obfuscation techniques which may prevent static or symbolic binary analysis.

“We recorded 100,000 measurement traces from an IoT [Internet of Things] device infected by various in-the-wild malware samples and realistic benign activity. Our method does not require any modification on the target device. Thus, it can be deployed independently from the resources available without any overhead. Moreover, our approach has the advantage that it can hardly be detected and evaded by the malware authors.”

In testing, the team were able to classify three generic malware types with a claimed 99.82 per cent accuracy – and even detect what obfuscations had been applied to training samples. The paper is available under open-access terms on the ACM Digital Library, while the source code is available on GitHub under the permissive MIT licence.

IEEE Spectrum editor David Schneider has written of a project to detect solar flares, gamma-ray bursts, and other “space weather” phenomena with less than $100 in equipment – turning a cheap sound card into a radio receiver.

“VLF [Very Low Frequency] transmissions aren’t at all hard to pick up,” David explains. “And these signals can reveal more than just the presence of a powerful radio transmitter nearby. The application I had in mind was to use changes in VLF-signal strength to monitor space weather.

“That’s possible because these VLF transmissions travel over large distances inside the globe-encircling waveguide that is formed by the Earth’s surface and the ionosphere. Solar flares—and rare astronomical events called gamma-ray bursts—can alter the ionosphere enough to change how radio signals propagate in this waveguide. I hoped to use VLF broadcasts to track such goings-on.”

David’s project uses, at its heart, just two parts connected to a laptop running the Spectrum Lab software: a cheap coil antenna and a simple USB sound card capable of 96kHz operation. The remainder of the $100 budget went on tool for tuning the antenna, David explains – with the final result being the capturing of a solar flare from the sudden ionospheric disturbance (SID) it caused.

Communications expert David Rowe, PhD, has written up an experiment in measuring high-frequency noise around a city – using a loop antenna and a spectrum analyser to gather raw data.

“I hatched a plan to take my loop antenna to a bunch of national parks around the perimeter of the city, and see if I could get sensible bearings back towards the city,” David explains. “This time I used a spectrum analyser so I didn’t have to mess around with s-meters. I spent a pleasant day circumnavigating the city, and hacked up a Python script to plot the results on a map.

“[The] results suggest noise levels drop as we get further away from the city, and is some evidence for ground wave propagation of noise from the city. I had wondered if being sited in a valley just outside the city would be enough to get a low noise floor, but perhaps distance is a factor as well.”

David’s write-up is available on the Rowetel website, while the Python source code has been published to GitHub under an unspecified open-source licence.

Finally, radio amateur Peter Waters has offered advice for those looking to put together a low-cost “budget-class” high-frequency antenna system for small back yards.

“When i was first licensed I didn’t have much money at all,” Peter explains, “and it was really a question of scrimping and saving and going around the junk shops and buying what I could afford.”

An interest in frugal radio equipment led to Peter’s latest video, which showcases a very low-cost HF antenna system designed for smaller back yards. “[This is] a simple aerial that almost anybody can erect in their back garden,” Peter explains, “even a small back garden. Even if your back garden’s only around about, what, 20 foot – whatever that is in metres, seven or eight metres – long you can actually get an HF antenna in there.”

The full video is available on Peter’s YouTube channel now.