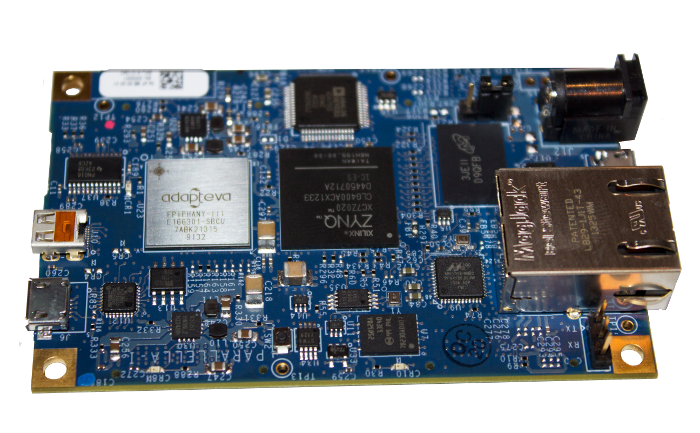 Delivering 26 GFLOPS performance for only 5 watts power consumption, it should come as no surprise that the $99 credit-card sized Parallella computer is generating a lot of interest for use with software-defined radio. What’s more, in addition to making it possible to run applications on a mobile power budget where it would have previously required a much more power hungry host, Parallella also includes an FPGA and high-speed expansion which can be used for interfacing transceiver silicon.

An interface for the Myriad-RF 1 module

Early prototypes of the Parallella computer comprised of a Xilinx ZedBoard plus an Epiphany accelerator FMC. Back in July, veteran open source SDR hacker, Sylvain Munaut, integrated the Myriad-RF 1 module with his Parallella prototype, via the original Myriad-RF DE0-Nano interface.

Following integration of the electronics, Sylvain very quickly put together a HDL and software solution that allowed him to grab a few seconds worth of samples from the Myriad-RF module, which could then be visualised via GNU Radio.

This is by no means the end game and Sylvain plans to create a custom interface board to enable use of Myriad-RF 1 with Parallella, and more than just providing simple integration the plan is for the board to also include a number of additional handy features.

For further details see Sylvain’s post on the Parallella blog.

A truly exciting year ahead

The first batch of production, a.k.a. “Gen1.1”, Parallella boards recently started shipping and with over 6,000 due to go out to those who backed the Kickstarter campaign, and following which many more to those who have since placed pre-orders.

As 2013 draws to a close, the new year ahead looks set to be a particularly exciting one thanks to the SDR possibilities enabled by the combination of Parallella and Myriad-RF hardware!