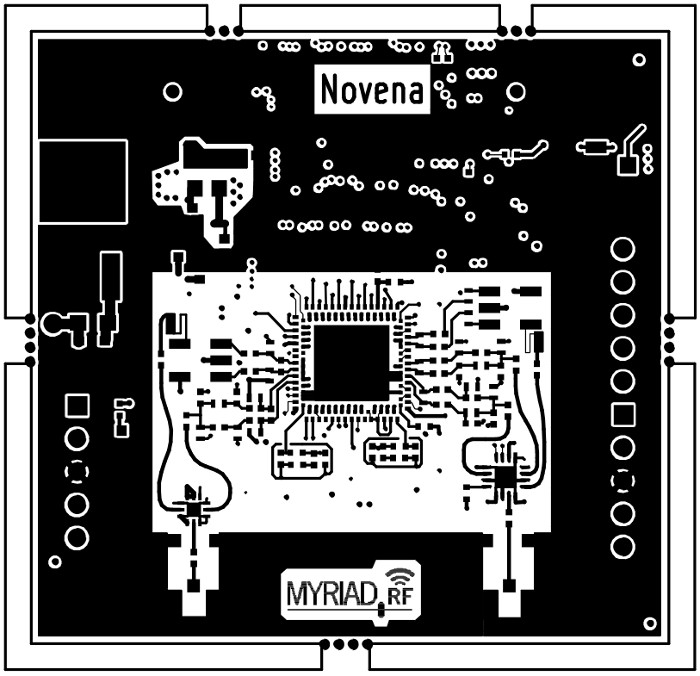 Adding a 300MHz-3.8GHz SDR transceiver to the currently crowdfunding open hardware platform that can be configured as a laptop or desktop.

An open hardware laptop, that you are free to modify and extend as far as is practical, is the dream of many an open source advocate. Now, thanks to the efforts of Bunnie Huang and his team this dream may soon become a reality, via the Novena platform which is currently crowdfunding.

ARM powered and designed from the outset to be easily extendible, Novena incorporates an FPGA and provides a high-speed digital connector for custom expansion. By fortuitous coincidence, this connector is the very same Hirose FX10-80P/8 as used with the original Myriad-RF 1 module.

Of course, Novena does not use the same connector pinout as the Myriad-RF 1 — that would be far too great a coincidence! However, to make a new version of the module that would be compatible took little more than re-routing traces.

A Novena compatible design was put together as a spare time project and other changes that were made for this include:

If there is sufficient interest we’ll look into setting up manufacturing and distribution for the board and a poll has been set up where you can register interest. The KiCAD design sources and manufacturing files are available now on GitHub .

3D render of the module PCB

It is something of an understatement to say that we were excited when we first heard about Novena, we’ve closely tracked its progress ever since and we’ll be keenly following the campaign!