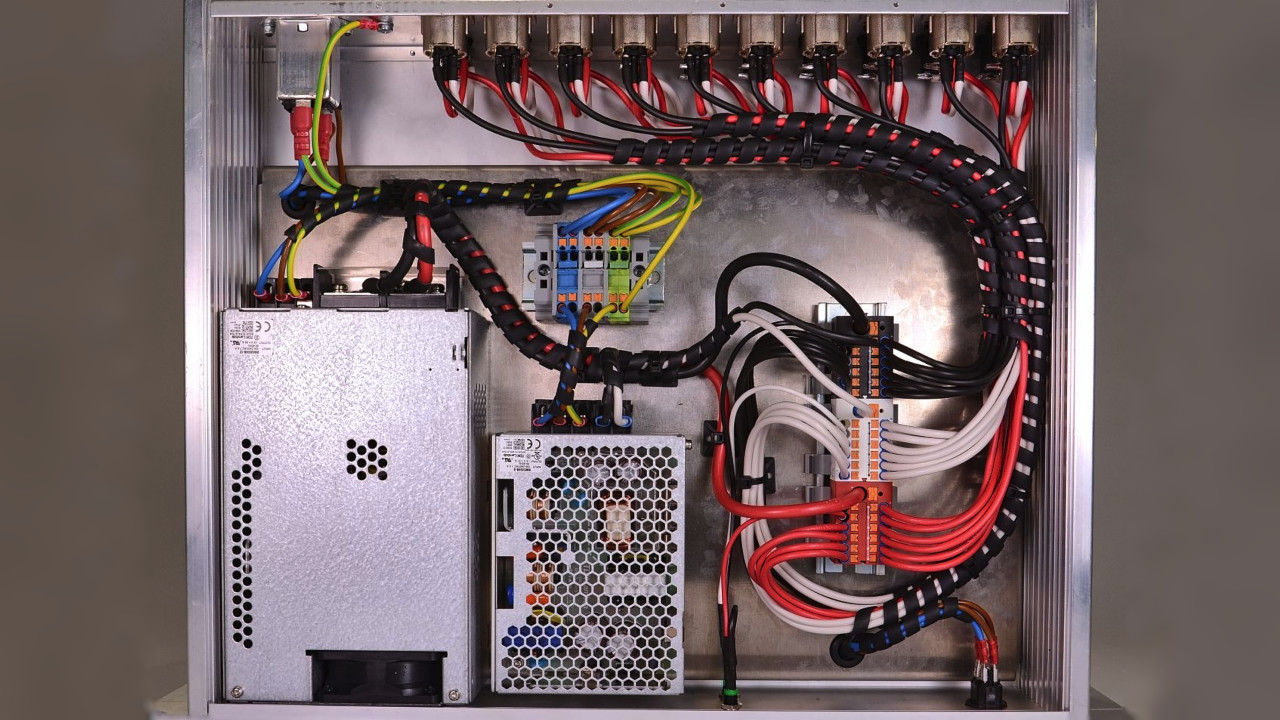 The LibreCellular project has reached the milestone of having a reference base station and related continuous integration (CI) subsystems completed with initial documentation, bringing it a step closer to its goal of open cellular communication for all.

Launched in May last year, LibreCellular is an effort which aims to provide a fully-tested and validated hardware platform and software stack for 4G Long Term Evolution (LTE) networking building atop open-source projects including srsRAN (formerly srsLTE) and Open5GS, OsmoGSMTester, the LimeSDR family, and LimeRFE.

Now, the project has reached the impressive milestone of completing the first build and initial documentation for a continuous integration (CI) system – including a LimeSDR USB-based reference-design base station.

“In addition to which there are the COTS subsystems for RF test and measurement, CI host and Ethernet switch.”

Additional details are available in Andrew’s update, while the CI hardware platform is documented on the LibreCellular website.

MyriadRF community member Jacek has written a brief guide to using a LimeSDR Mini on an Android smartphone, installing the Kali Linux distribution in order to gain access to a full suite of software utilities.

“My LimeSDR Mini, connected to [my] OnePlus 7 [Pro], receives, records, and transmits signals,” Jacek writes of his mobile-SDR setup, “and is powered only from the phone. If everything is planned and configured, OnePlus 7 Pro + SDR is a much more ambitious solution than [the] PortaPack [system].”

Jacek’s approach sees the installation of Kali Linux atop the phone’s default Android operating system, which is then used to install GNU Radio, SoapySDR, LimeSuite, and a VNC client – required in order to provide a graphical user interface, with Jacek noting that otherwise “everything works from the terminal, so without GUI – for some it is an advantage, for others a disadvantage.”

“DragonOS and SDR++ running on the Steam Deck w/ settings both visible and tucked away,” Aaron wrote in a tweet accompanying two pictures, provided by radio ham Corey Koval. In both images, the SDR++ graphical user interface can be seen running – communicating with an SDR dongle attached to a USB Type-C On-The-Go port.

Designed primarily for gaming, Valve’s Steam Deck is actually a portable personal computer using industry-standard hardware and running a tweaked Linux distribution – making it ideal for field use, particularly where workloads can take advantage of the surprisingly powerful CPU and GPU held within the system.

Both images have been published to Aaron’s Twitter account, but without details on how the software was installed.

“[I’m] playing around with a new feature of the Co-Channel Canceller,” Youssef wrote in a tweet accompanying a video demonstration of the updated software. “Still a lot of polishing, but it already shows some improvement over the old version. The Micro Tuner panel is used to lock exactly on the strongest carrier. The effect on DSB comes as expected. Binaural adds another layer of comfort. Then the Co-Channel Canceller removes the strongest station entirely, leaving many stations in the background.”

The software’s original co-channel cancellation functionality was introduced back in October 2020, offering support for AM initially and FM in a follow-up. The latest release of the software, meanwhile, now includes improved digital signal processing, an enhanced user interface, and what Youssef describes as “a new ‘Super PLL’ for die hard DXers.”

The co-channel cancellation demo is available on Youssef’s Twitter account, while the latest SDR# build can be downloaded from AirSpy.

“The major news for this release (aside from the usual series of bugfixes) is the support of LTE/4G via the so-called 3GPP SBcAP interface,” Harald writes of the new software. “This means that emergency messages can now not only sent to a 2G/GSM cellular network, but also to a 4G/LTE network. The support of 3GPP standardized SBcAP ensures interoperability with a variety of different EPC/MME.

“Development of this 4G capability was made possibly by a generous grant of the NLnet foundation.”

Open-Weather co-founder Sasha Engelmann has announced a new tool for those playing around with weather satellite imagery: a browser-based decoder for data from National Oceanic and and Atmospheric Administration (NOAA) satellites.

“Open-Weather APT [Automatic Picture Transmission] emerged from a desire to understand the process of decoding APT audio recordings into NOAA satellite images,” Sasha explains of the project, “and a need for an accessible online decoder for new practitioners during Open-Weather DIY Satellite Ground Station workshops. Open-Weather apt is forked from Thatcher’s APT 3000. It is a collaboration between Open-Weather, Bill Liles NQ6Z, and Grayson Earle.”

While there is little shortage of software utilities for decoding APT data into a visible image, Open-Weather’s utility comes with a big advantage: it runs entirely in-browser, and doesn’t require the user to install any software locally. The user can simply upload a WAV-format recording of the satellite signal, choose between absolute value, cosine, and Hilbert fast-Fourier transform (FFT) demodulation, and click a button to decode the image.

More information is available in Sasha’s announcement, while the tool itself is live now on the Open-Weather website.

IEEE Spectrum senior editor David Schneider has written up his experience with the sport of radiosonde hunting – using software-defined radio to find weather balloon payloads as they’re falling back to Earth.

“Eventually the [weather] balloons ascend so high that the low pressure causes them to burst. The radiosonde package descends, slowed by a small parachute,” David explains. “Sometimes these radiosondes are found on the ground. The NWS reuses returned radiosondes when it can. Tracking one down and returning it would be a way for me to say, ‘Thank you’ for the essential work the folks there do. My hunting gear would be a pair of homemade antennas and a software-defined radio (SDR).

“To further help me find a downed radiosonde, I built a directional antenna using a handy website to design a five-element Yagi antenna for 403 MHz. I constructed it using some left-over PVC for the boom and some 1/4-inch-diameter (6mm) copper tubing that I had in my scrap pile. Despite its origins as junk, it works great.”

Finally, Hackaday has drawn our attention to a minimalist software-defined radio project for high-frequency (HF) shortwave use, created by Aniss Oulhaci.

Described by Aniss as “the simplest SDR receiver that you can build on your breadboard,” the design uses a pre-amplification circuit, an switching mixer, clock generator, and flip-flip, connecting to a PC’s soundcard for recording and decoding.

The “software defined” portion, meanwhile, is driven by a low-cost Arduino Uno microcontroller development board, which communicates with the clock generator to tune the radio – using code originally written for Elektor’s SDR Hands-On Kit and its Arduino Uno shield accessory.

More information, including a link to download the schematic and source code, is available on Aniss’ video of the project.