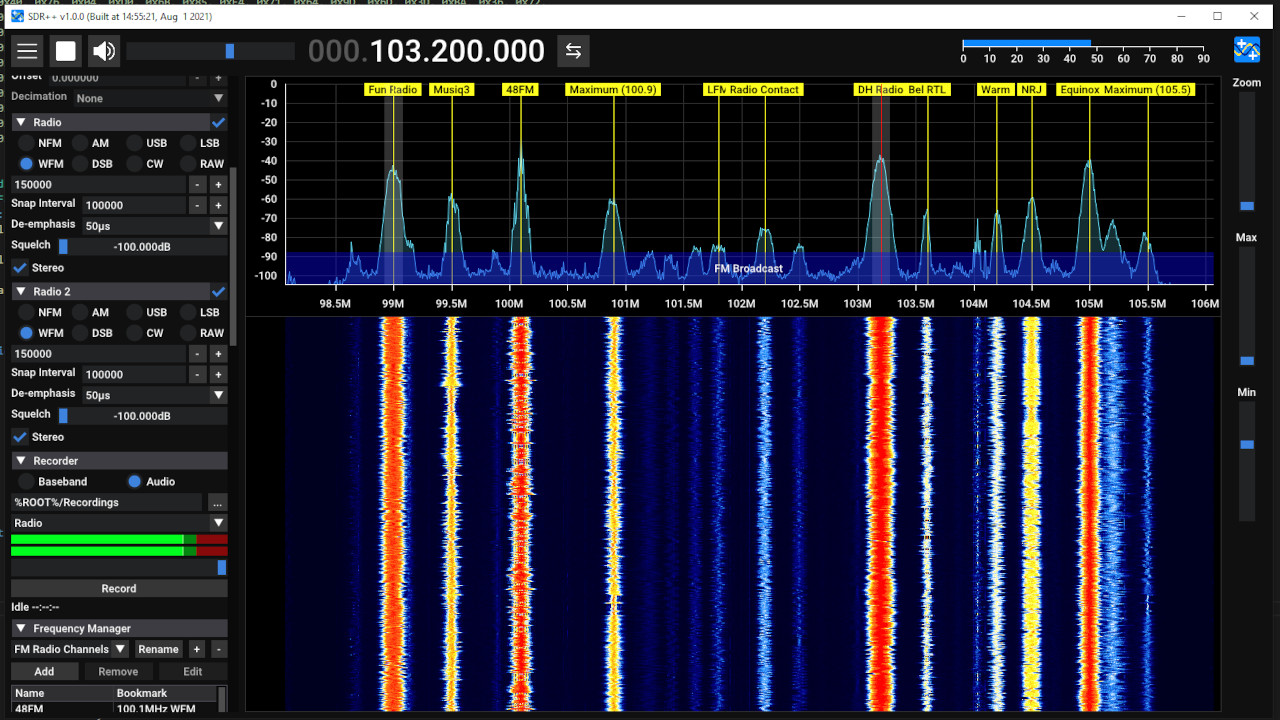 “For those who don’t know,” Alexandre explains, “SDR++ is a cross-platform (Windows, Linux, MacOS, BSD) and open-source general purpose receiver software meant to be simple and easy to use. It has advanced features like multi-vfo and uses a fully custom DSP making it very efficient.”

We first covered the project back in July 2020, when it launched as a Windows-only alpha. Six months later and the now cross-platform SDR++ boasted a range of improvements – and development hasn’t slowed.

In the milestone 1.0.0 release SDR++ expands its support to the whole LimeSDR family of software-defined radios, adds optional IQ correction and decimation, a frequency manager with direct display onto the FFT or waterfall, a network sink for audio output streaming, new FFT configuration options, an SNR meter, coloured VFOs and additional detail when hovering the cursor over a VFO, integrated Meteor M2 demodulation, and a module manager which allows the user to disable unused modules in a single click.

As always, the latest release and full source code are available on GitHub under the reciprocal GNU General Public Licence 3.

The Bluetooth Special Interest Group (SIG) has officially launched Bluetooth 5.3, the latest release of the standard – bringing with it new features focused primarily on the Internet of Things (IoT).

Among the new features of Bluetooth 5.3 are: connection sub-rating, which offers improved efficiency for devices which move from low-power to high-bandwidth modes for burst transmissions; an improved periodic advertising implementation which notifies receiving devices of any changes which need to be processed; improved encryption key control; and a channel classification feature for improving automated channel mapping to boost performance.

“The Bluetooth 5.3 release is a minor enhancement to the protocol,” Silicon Labs’ Jayanth Krishna claims in a blog post on the topic. “Yet, it provides major improvements on wireless reliability, energy efficiency, and user experience, enabling you to create ever more innovative ways to win the IoT race!”

The latest specification documents are available, as always, from the Bluetooth SIG website.

A team working at the University of California San Diego (UC San Diego) claims to have come up with a workable approach for getting the best in both coverage and throughput from 5G and other mmWave networks – by splitting the signal into multiple beams.

“You would think that splitting the beam would reduce the throughput or quality of the signal,” says Dinesh Bharadia, professor of computer engineering at UC San Diego. “But with the way that we’ve designed our algorithms, it turns out mathematically that our multi-beam system gives you a higher throughput while transmitting the same amount of power overall as a single-beam system.”

The team proved the concept with indoor and outdoor testing, showing that a pair of machine learning algorithms – one to split the beam into multiple paths and the other to track the movement of the receiver – could offer 800Mbps throughput with a 100 per cent reliability rate and a range of up to 262 feet.

The system is also claimed to be fully compatible with existing hardware, and can be implemented entirely in software – but, the team admits, the next step is to scale the system to support multiple simultaneous users.

The news, spotted by a radio amateur and posted to Twitter then brought to our attention by RTL-SDR, comes as a surprise. The Russian Elektro-L2 and Elektro-L3 weather satellites had previously transmitted exclusively on the X-band, making reception a challenge for radio amateurs.

Now, Elektro-L3 appears to have activated an L-band LRIT (Low Rate Information Transmission) signal – in testing, it would seem, but hopefully as a long-term alternative to X-band reception and significantly easier to receive on modest equipment.

No formal announcement of the testing, nor roadmap to making the transmissions permanent across the constellation, has been made.

The Wireless Innovation Forum (WInnForum) has announced the approval of a project on passive and active spectrum sharing, under the auspice of the newly-formed PASS working group.

According to the formal announcement, the PASS project – co-chaired by Kevin Gifford, PhD and research professor of computer science at the University of Colorado-Boulder, and Google’s Andrew Clegg, PhD and chief technical officer at WInnForum – aims to investigate systems for expanding commercial spectrum sharing.

While primarily for members, WInnForum has indicated it may invite non-member observers and subject matter experts to future meetings of the working group – and has asked that interested parties get in touch with Lee Pucker via email.

Back in June TIP’s OpenRAN MoU Group – which has Deutsche Telekom, Orange, Telefónica, TIM, and Vodafone as its signatories – released the Open RAN Technical Priority Document, designed to build into a mutually-agreed roadmap for taking open RAN from the lab and into a commercial reality.

Now, TIP has announced the OpenRAN Draft Release 2.0 Detailed Technical Requirements as the next step in the process. Currently available to OpenRAN Project Group members for a feedback period running through to the 20th of September 2021, the document is to form the basis for a centralised industry roadmap towards open RAN development and deployment.

“By coalescing the industry, aligning prioritized requirements, harmonising a central OpenRAN roadmap, progressing it through TIP’s Test & Validation framework, and showcasing the outcomes on TIP Exchange,” the organisation claims, “TIP is driving the industry towards Open RAN productisation. This process avoids fragmentation, with the ultimate goal of helping accelerate the development and deployment of standards-based, open and disaggregated solutions for actual Open RAN use cases.”

The UK Government has published reports on the Liverpool 5G Testbed and Worcestershire 5G Consortium projects, both of which aimed to see how next-generation cellular communication technologies could improve a variety of use-cases.

“The Liverpool 5G Testbed was the first health and social care testbed in the 5G Programme,” the Department for Digital, Culture, Media & Sport says of the project. “The project managed to successfully build a low cost, publicly-owned 5G network to provide affordable connectivity in a disadvantaged area of Liverpool. It also demonstrated high-quality healthcare applications and devices that could deliver both substantial cost savings to health providers as well as improved health and quality of life to its users.

“Led by a team of 5G and Industry 4.0 experts, the Worcestershire 5G Testbed provided a platform for UK industry to develop and test next-generation technology that could revolutionise the way businesses operate in the future,” the DCMS adds of the second project. “The Worcestershire 5G Consortium, based at Malvern Hills Science Park, explored the feasibility of a range of use cases including possible ways to increase productivity through early machine fault detection using robotics, remote training, and ‘security by design’ at the Worcester Bosch factory.”

The full ports on the Liverpool 5G Testbed and Worcestershire 5G Testbed are available on GOV.UK now.

IEEE Spectrum has published a piece peering into the future and claiming that artificial intelligences, not humans, will be responsible for wireless signal design and spectrum management.

“The era of telecommunications systems designed solely by humans is coming to an end,” the piece, written by Joe Downey, Ben Hilburn, Tim O’Shea, and Nathan West, claims. “From here on, artificial intelligence will play a pivotal role in the design and operation of these systems. The reason is simple: rapidly escalating complexity.

The full article, which was published in the May 2020 print issue, is available on the IEEE Spectrum website now.

Elsewhere on IEEE Spectrum, Roy Rubenstein has written on the topic of “cognitive radios” – and how they are likely to deliver on the above promise by automatically controlling how they use the radio spectrum.

“If radios could somehow use a portion of the broadcast TV spectrum without causing interference, cellular telephony and other important services would be able to exploit those bands, too,” Rubenstein explains. “To manage such feats, cellphone handsets would have to be able to shift their frequency of operation on demand and without packing in lots of extra hardware. Telecommunications engineers have a name for that goal—software-defined radio.

“And the more visionary among them see it as a stepping-stone to an even more distant ideal. Their goal is a wireless device that is smart enough to analyze the radio environment and decide for itself the best spectral band and protocol to reach whatever base station it needs to communicate with, at the lowest level of power consumption. The name for such remarkable systems is ‘cognitive radios,’ and some are already emerging from the laboratory to be field-tested by the U.S. military, which has long sponsored research in the area.”

The University of Bristol and King’s College London have announced a partnership on a research centre for 6G cellular communications technologies – building on the Bristol Smart Internet Lab and the London Centre for Telecommunication Research (CTR).

“The public is only beginning to see first-hand the enormous potential of 5G networks, an area which we have been working on for many years. Through this new centre, we will now focus on the next generation mobile networks – 6G and beyond – and the truly awe-inspiring capabilities these will bring,” says Dimitra Simeonidou, professor and director of the Smart Internet Lab. “6G will be inherently human-centric, and will establish a cyber-physical continuum by delivering real time sensory information, supporting haptics and holograms.

“As adoption of 5G accelerates around the world, it’s important the UK is prepared for 6G as the next generation mobile technology,” adds Mischa Dohler, professor in wireless communications at King’s. “The creation of this centre is a notable moment for the UK technology sector. We will be developing novel architectures, incorporating federated exchange and self-synthesising mechanisms, advance the internet of skills, and embed blockchain, quantum and federated AI technologies. But it’s not just pure tech – we’ll be working on co-creation with verticals toward some truly exciting and societally impacting use-cases, while contributing to policy, alliances and global standards.”

More detail on the centre, dubbed 6G Futures, can be found on the official website.

Finally, Hackaday has brought to our attention a project to build “variable reactive elements” for radio work – using a syringe.

“Sharing this variable inductor I threw together last weekend,” radio amateur Tom Essenpreis writes of his work. “22AWG magnet wire. Taps at 6,6,12,12,~90+ turns; 3 ferrite rods from some junk bin AM radios glued into the shaft of a 60ml syringe.

“Winding the outside of the syringe with magnet wire,” Hackaday’s Ryan Flowers explains, “the alignment of the ferrite can be adjusted via the plunger, changing the characteristics of the element to tune the circuit.”